This short post is to clarify why this site has been down for a while, someone made an attack on the website and the reason for this is pretty obvious. I have pissed off someone that I have written a (most likely not so possitive) review about.

Attack On Website – Why Some People Take Shots On You

It is not the first time this happens and I am pretty sure that it is the same person behind this latest attack as it was the last time (around 3 months ago).

Why I am almost sure of that, well the attack technique has been the same. Someone has been sending huge amounts of traffic to my site so that the server my site is on, pretty much got overloaded and that is A LOT of traffic!!

Someone has actually copied and put up a post that I made over a year ago on a site named ptcpoint.com and that is also the place where the unwanted traffic has come from.

Below you have a screenshoot from the site ptcpoint.com and you can see the “author” name that I have pointed out with the red Arrows 🙂 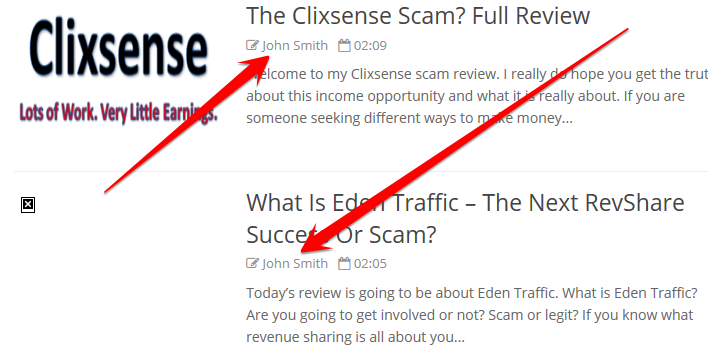 However, there is only one of my posts that has been put up on the site, the other posts I have not written. The one that I have made is the one about Eden Traffic. If you want to see the original by me then you can click here

I did send a mail to the Contact email adress on this ptcpoint.com site more than 3 months ago, where I asked them to kindly remove MY article from the page, but still haven´t recieved an answer from them…

Anyway, Life goes on and I WILL continue to write the reviews I write no matter what and attacks like this only makes me more convinced that I really help people to avoid some pitfalls online.

If you are tired of being scammed by so called “make money online” programs then you should find a legit program and learn how it really works to make money online… It does take effort and it does take time though. Anyone telling you different is straight lying to you.

You are a smart person and you deserve to find what you are looking for.

You can end it all:

by looking at this

So to you who made the attack on my website I just want to say: